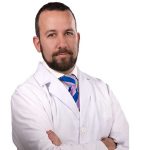 three-year Masters’ program (2001-2004), obtaining the Board Certificate in Periodontology from the European Federation of Periodontology in 2004.
Dr. Rodrigo has written 21 articles in various national and international journals. He has also co-written three chapters of books relating to his area of specialisation, and has been a lecturer in more than 35 courses and conferences in Spain and overseas. In his main role, his focus is exclusively on periodontology and implant therapy at PerioCentrum Guadalajara and in Madrid, although he also dedicates some time to his role as a professor in the periodontology and implants postgraduate program at the Universidad Complutense de Madrid. He is also involved as a researcher in the Master de Periodontology program offered by the same university and on the Internacional Team of Implantology (ITI). At present, he is the spokesman for research for the International Implantology Team of Spain and Portugal.

Teeth in one hour.

Implantology: The insertion of titanium implants (screws) in the jawbone to replace missing teeth.

Hygiene and prevention: Assessment of the risk of cavities, education on the prevention of dental disease.